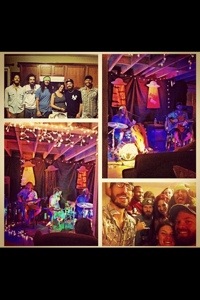 A little while ago we decided that anybody who has hosted 2 living room/house shows is automatically inducted into the Full Service Fansaw Hall of Fame. Kind of like hitting 500 home runs pretty much guarantees your entry into the Baseball Hall of Fame. Now, ladies and gentlesaws, we are proud to announce Ryan and Stefanie as new inductees into the FSFHoF. They first hosted us back in April of 2012, and now—just 16 months later—we are back in their vibed-out basement playing for them and their friends.

When you put on an event twice, the special things you did at the first event that carry through to the second receive “tradition” status. So I think it’s safe to say that Ryan and Stef have created a tradition of decorating the basement with homemade crafts. Last time it was a crazy octopus banner type thing, and this time it was a foam rocketship, little tiny cutouts of all the members of FS, and—the centerpiece—personalized logos to hang above each member onstage. (Depending on your point-of-view, they are either personalized superhero capes, personalized UFO’s, or personalize salt-shakers. You decide).

We were pretty loose at this show, for whatever reason. Mistakes a-plenty, but none of which really bothered me (and they usually do, as surprising as that may seem). One of the reasons we flubbed some stuff was because we played songs we have never or don’t usually play acoustic, such as “Dumb Angel” and “Better Back Then”. We also played some new ones like “Evergreen” and “Cleepies”. But the crowd was friendly (notable cruise alums Chris and Olga made the trip in), and we had a great time bantering with them.

Also of note? On Dumb Angel, I landed a pretty sweet stick flip at the end of the song. You can see it (and how surprised I am at the achievement) in the accompanying video. (James, did I spell “surprised” correctly?)

Also in the video, you will find a Yankees collage hanging in their kitchen. Ryan is a huge fan. But I give him considerable grief for the inclusion of A-Rod in said collage. Sorry dude, but the guy’s a bozo!

Vitali didn’t make it to the show, he stayed back in Philly with Momsaw and Dadsaw, but he was well-represented on a shirt Ryan had made back in May when he and Stef came to the Circus. (Again, see video).

Anyway, great time out there in the woods of Milford, PA. You always gotta keep an eye out for bears during load-out, but I’m happy to say there were, and never have been, any incidents. Let’s hope that’s a streak that continues when we play at Ryan and Stef’s for a third time, whenever that may be. (Begging the question, is there a level higher than the FSFHoF? And does a third hosting guarantee entry into that?)