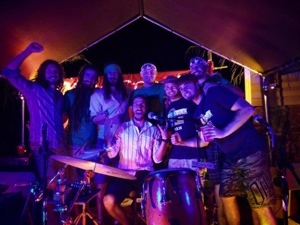 So there are these dudes in West Chester, PA. A guy named “Hammer” is the one who booked us, but it’s a whole big brotherhood they’ve got going on, and they throw this thing called “Ahk-Stock” for their friend named “Ahmed”. Only the video recap can really do it justice, but the following words and phrases will give you a quick idea of what this thing was like: a neighborhood, an old speed limit sign on the corner that had the “2” of “25 mph” painted over (5 mph), lawn games, cup-holders that stick in the lawn, food, big open field, canopy tents, dogs, a river, fishing poles, small-mouthed bass, a homemade raft with a makeshift motor and steering helm attachment, home-made stage involving branches and leaves and bamboo, a huge game of ultimate frisbee, lots of Eagles and Phillies clothing, a fire-pit, a girl who could throw a football like freaking Terry Bradshaw, a group of marines, a trio of linebackers from Shippensburg University, and two sets by Full Service (one electric and one acoustic).

Hammer and his core crew treated us very well. They loaned us equipment for our electric set (since it’s the only electric set of the tour for us). They provided Bonesaw with gluten-free beers (he drank two!). They got us t-shirts commemorating “Ahk-Stock”. They even hd spare bathing suits out just in case one of us bozos forgot their suit (I did). And they way they organized an impromptu 4-team Ultimate Frisbee round robin tournament was impressive and I might even say inspiring. (side note, for anyone keeping score…Bonesaw, Hoag, and Smell’s team took first place).

Hammer made set-lists for both our electric and acoustic set, so it was pretty much the perfect Full Service experience for him I suppose. And it was great playing some rare ones like “Eyes Like Snow”, “Subterranean”, “Laundry on the Line”, “Like a Pony”. Plus, we hadn’t played an electric set since The Circus (!!), so that felt really good.

All in all, what a ridiculous time we had. You know it’s gonna be a great show when there’s a dude in the crowd with an Allen Iverson Sixers jersey on. And when the whole crowd boos Smell for being a Cowboys fan. Enjoy the video!

Oh and here’s the sweet Iverson jersey I mentioned. This dude was cool. 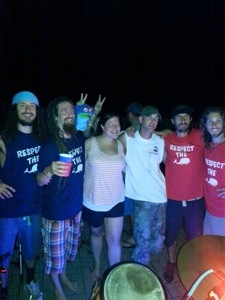 Just finished a backyard set at the Steffy house outside of Baltimore. First show of the tour! Actually first we went to the wrong house. Some rowdy-lookin’ dude with a barking pit bull and lots of tattoos answered the door. Not the Steffy’s. Oh wait, hang on, we are in the van now and about to try to hold our breath driving the length of the tunnel under the Baltimore Harbor. Be right back…

…ok we’re back. Sunny and I were the only ones to succeed. Bonesaw could have done it but he was driving and he didn’t want to put is at risk. Yeah so anyway, that first house wasn’t the Steffy’s. We were joking that when Joe Pitbull went back inside and was like “baby I thought you told me you stopped selling drugs” and he was like “I did, baby! Those people were lost!” and she was all “Oh REALLY….That group of long-haired tattooed hippies in sleeveless shirts was NOT here to buy drugs?!” Hahaha. Oh well. Hope that didn’t happen.

So we finally got to the Steffy’s. Great set-up. Bruce opened the show, as he will for most of the tour, and then we played 24 songs and I did a drum solo. Not improvised, it’s more of a composition, or a drum conversation I guess. It’s dedicated to Max Roach and I call it “Brushin’ Up”…get it? Because I use brushes in the acoustic show! Haha oh man I’m good.

Anyhoo, Vitali made an appearance this evening as well. He was a little scared of Z-Bo the big brown dog, but he managed to put a little monologue together. Other special things about this set? We played a new song called “Evergreen” from the upcoming album for the first time ever. When we played MJ, Bonesaw whispered “no guitar solo” just before we started the last chorus. But I didn’t relay the message down to Smell, who in turn–I guess–would have relayed it down to Sunny. I didn’t know we were playing freakin’ “Whisper-Down-the-Lane” tonight. Plus, by the time the message got down to Sunny it likely would have changes. Perhaps to the opposite. “Sweet! Bone’s gonna play a longer guitar solo! Right on!” Alrighty folks, here’s the set list from tonight, and some videos. 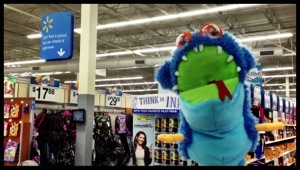 Oh my gosh! Have you guys ever heard of Walmart place of shop?? The FS d00dz go there all the time for pit stoppings, but this was my first time. Watch!! Vitali Tour-Diary (entry 2) 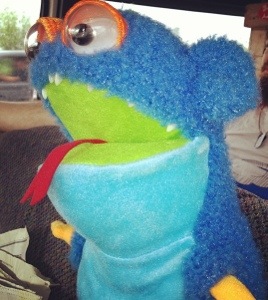 Hey d00dz!! The guys brought me on tour this time. Tune in to episode 1 of my video diary!!! Vitali Tour-Diary #1 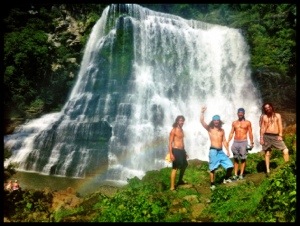 Headed to a swimming hole in Tennessee somewhere. Been in a long day cooped up in the Whale on the way to our first show of the tour in Baltimore to play at the Steffy’s. So far the highlight of the trip has been Vitali’s incredulous reaction to Walmart. He made a video diary about it, in fact. That little guy is still learning about this crazy country, and I tell ya; I love seeing the world through his eyes. Anyway, time to get out and walk to–wait…I am now being told it is not only a swimming hole, but also a water fall. I will report back shortly.
———————————–
Holy smokes, that was the real deal. It was like something out of South America. (Although I am unqualified to make that statement, as I have never been to South America). I’ll admit to being slightly afraid of standing under the falls for the group photo, but I am a creature of imagination, and in this case I imagined a free-falling stone taking a ride with the water and landing on my head, which may not have been a fatal scenario but possibly would have knocked me unconscious, or–barring that–at the very least have caused me embarrassment. But nothing of the sort took place. We just laughed and frolicked under the falls, and in fact there was even a rainbow! Now if that doesn’t teach me not to worry so much… In any case, here are some photos of the trip to Burgess Falls, TN. Ahhhh what a fun trip it was! Have you heard about our “20 Tour” backyard tours hosted by fans? Here’s a fun re-cap video f the June 2013 trip thru the midwest:

Just watch and re-live the magic…. and try not to pee your pants laughing!

And hear the new songs “Swimming Mood” and “Huge Gray Blue” with the first slideshow: